With VW planning to introduce the Type 3 Saloon (notchback) in 1961, Karmann saw the opportunity to produce a sports / luxury model for this new range.

Karmann followed the same formula in using Ghia’s Sergio Sartorelli to design the body style and one of the notable points is the sharp swage line, running from nose to rear, which gave it the nickname of “Razor Edge”. It was also bigger and heavier than the original Karmann Ghia which led to another nickname of the “Grosse Karmann Ghia” in Germany.

The Beetle and Type 3 range were produced along side each other in Wolfsburg, and the same occurred with the two types of Karmann Ghia in Osnabruck. However, due to its radical angular styling the Type 34 had limited popularity and the high cost of production led to its short life.

The Type 34 was introduced at the Frankfurt Motor Show in September 1961 and ceased production in 1969. Approx 12 prototype convertible models were produced but never put into production.

A handful survive, along with some converted coupes, produced by other coachbuilders such as Lorenz.

However an electric sunroof version (one of the first production cars with such a fitment, along with BMW 2002 and Porsche 356,) was introduced in 1962.

The car was very advanced, with a new “pancake” or “suitcase” engine, initially of 1500cc (45bhp) and by the time it arrived in the UK in RHD form in 1964 this had been fitted with twin carbs and increased compression (S version) to produce 54bhp. In 1966 a 1600cc unit was installed but with similar power output.

The engine, being very flat, enabled a small boot space above it and access through a hatch in the boot floor.

An automatic option was introduced in 1968. From the outset, the new ball joint front suspension with full width torsion bars gave a very smooth ride, superior to the Beetle derived version.

The car was withdrawn in July 1969 and replaced by the VW-Porsche 914. 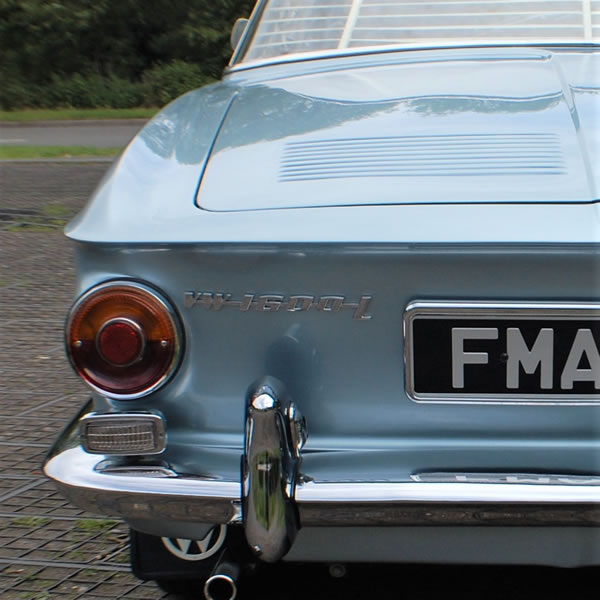 Thanks to VW Audi Magazine & ‘Essential Volkswagen Karmann Ghia’ by Laurence Meredith for the data for this summary.