Whilst owning a Karmann Ghia can be very rewarding, buying the right car can sometimes prove to be an arduous task, filled with many pot holes for the ill-informed.

The obvious benefit to owning a car of this age will be that it will be road tax exempt due to its historical vehicle classification, but the potential hazards are far reaching.

When the cars were new, they were no doubt cared for as the prize possessions they were, in the same way modern cars are cared for today. But as the years went by and ownership changes, the amount of care and money spent on keeping the cars road worthy, would in many cases, have got less and less. This would have meant that many cars were only crudely patched just enough to see them through their MOT, or equivalent.

Fast forward a couple of decades, and the Karmann Ghia, like many other classics, has become a very desirable marque once again.

Prices for the cars in recent years have seen a dramatic rise, but that doesn’t always translate to every Karmann Ghia being worth a lot of money.

Things that need to be considered when buying a classic car include not only the general condition, but also the originality and provenance the car has.

Modifications will also have a bearing on value as well as the potential market for resale. Whilst some high-end modifications can increase the value of a car, poor attempts can greatly reduce its value.

Another phrase banded about is ‘matching numbers cars’. This is simply the chassis number and engine numbers being original to the car when it left the factory. It is not unknown for a type 14 Body being bolted to a beetle chassis that has had wider floor pans grafted to the centre column, or a type 34 ending up on a type 3 floor pan, but these cases are extremely rare.

Check the doors for excessive uneven gaps caused by the extra stress from removing the roof will be evident. If you see a type 34 convertible for sale it will no-doubt be a converted coupe as only a handful of prototypes were made.

Whilst some parts for the type 14 are readily available this isn’t the case for the type 34. That in turn has led to prices being over inflated due to the basic principles of supply and demand.

Whilst the running gear for the type 14 is the same as a beetle and the type 34’s follows the type three, the bodies are specific to each.

Unlike the beetle the Karmann Ghia’s panels weren’t pressed as on single panel but made up from several smaller panels. This means there are several potential weak spots that could be susceptible to corrosion.

This leads us on nicely to the biggest Ghia killer out there… ‘rust’. This is the single largest consideration to be considered, as removing, repairing, replacing or restoration can simply burn a severe hole in your bank account, especially if you can’t do any of the work yourself. We’ve compiled a couple of guides for the usual areas of concern for both the type 14 and type 34 below.

Back to the beginning of this article and I’d like to reiterate how rewarding it is to own and drive a Karmann Ghia. As member the club we will give you as much help, support and advice to help you realise your dream of owning the right car for you. 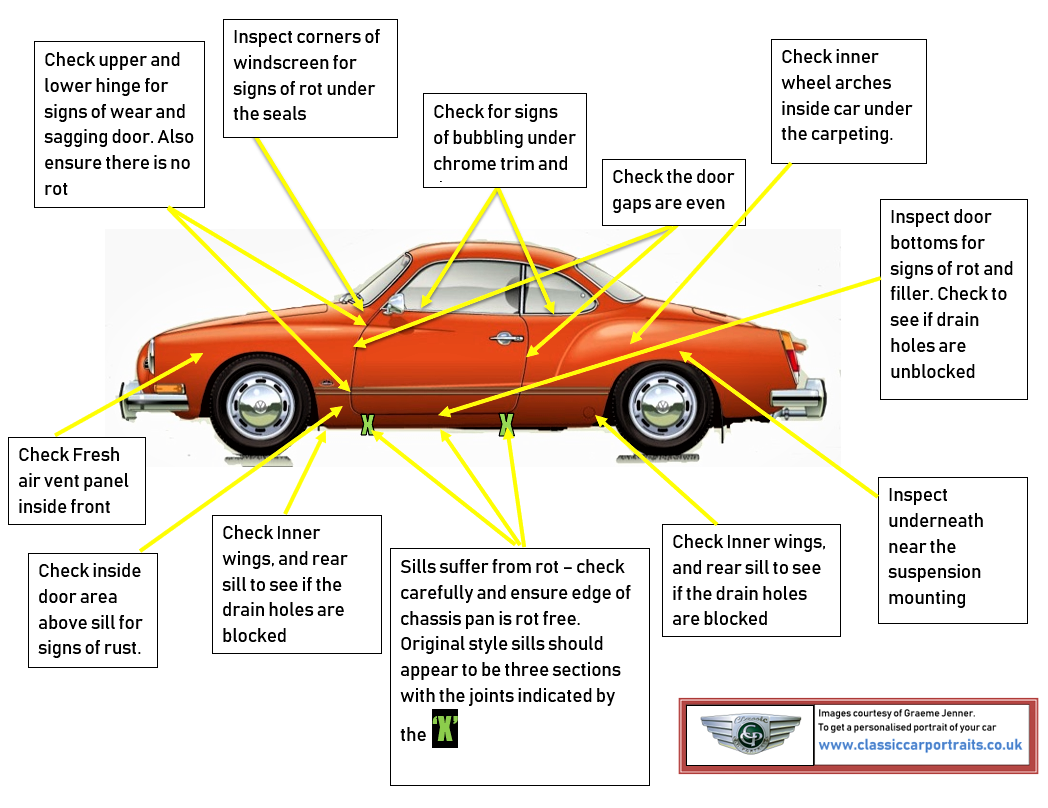 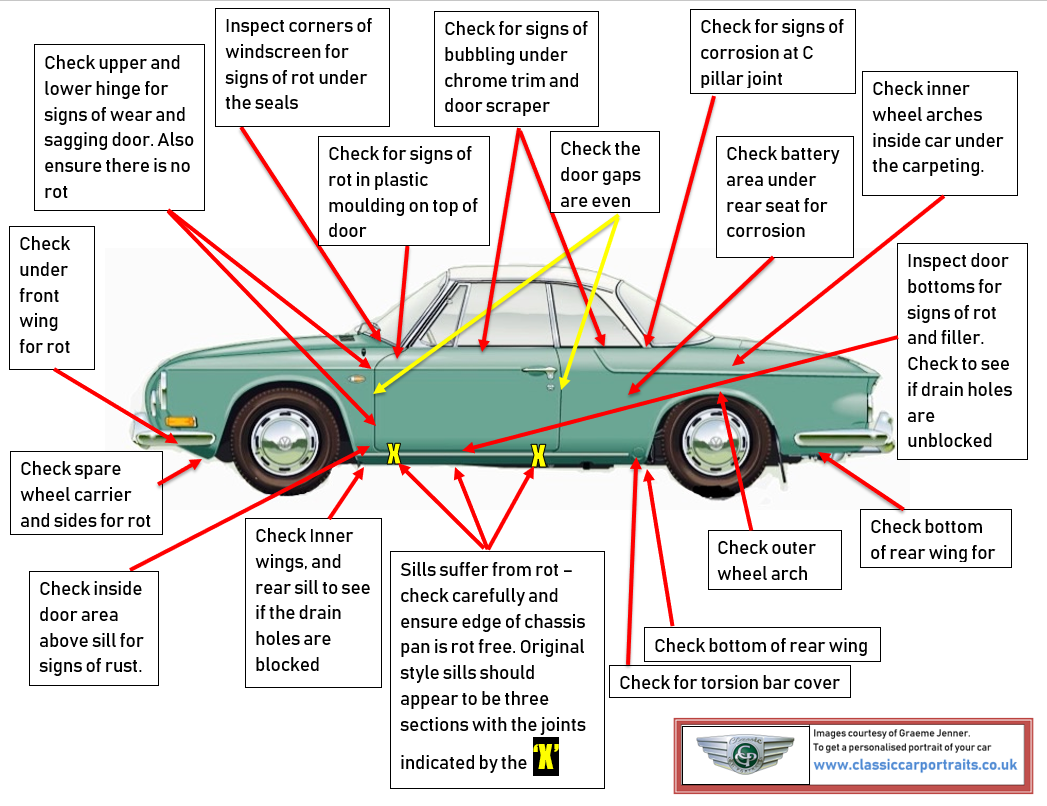 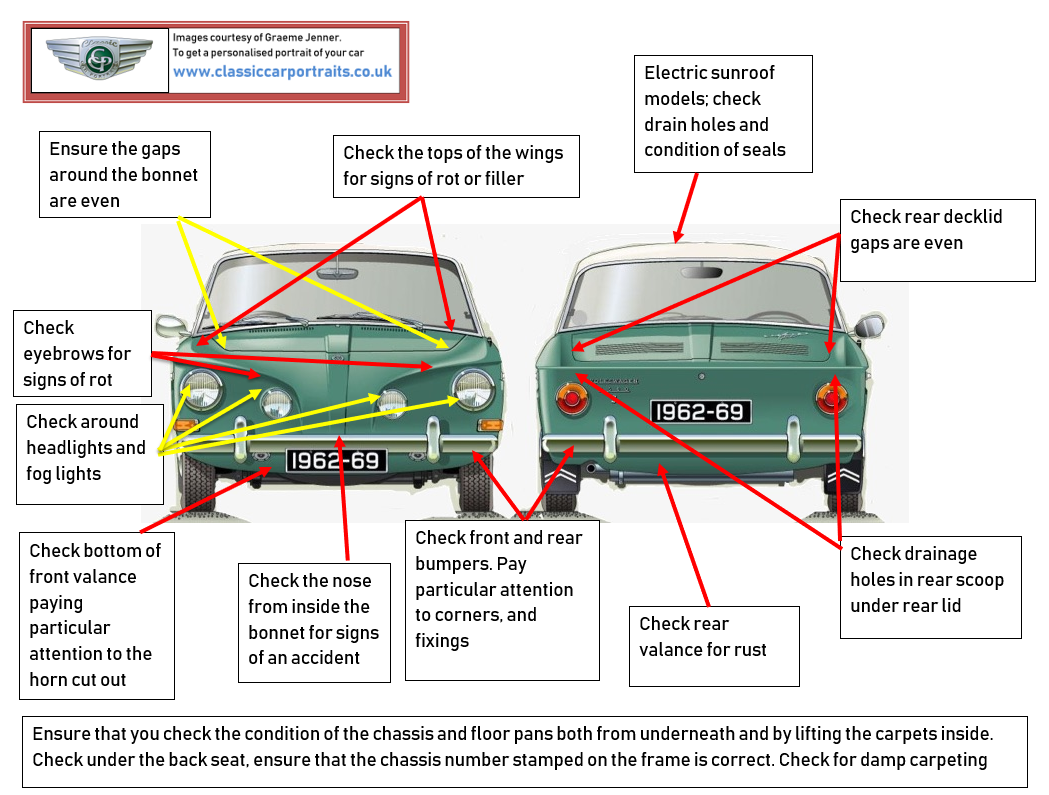