The VW Karmann Ghia was born through the desire of W. Karmann GmbH, producers of the Beetle Cabriolet for VW, to produce a sports bodied car upon a reliable and tested chassis. Initial designs by Karmann were turned down by VW so because of the popularity of the Italian design studios at that time, Karmann turned to Luigi Segre of Ghia in Turin to produce a prototype which would satisfy VW.

The project started in 1950 and the plan and body designs were finally approved by VW in 1954 when they confirmed that a supply of chassis would be made available to the Karmann factory in Osnabruck. The press launch was held at the Kasino Hotel in Westfalen, close to Osnabruck, on 14 July 1955 and then the official launch at the Frankfurt Motor Show in September.

The car was mainly assembled by hand on purpose built jigs and was very labour intensive. It consisted of many panels and the external body joints being welded, then smoothed and lead filled to produce seamless joins.

It was expensive to build but benefited from the VW distribution and sales network to help market it. The car continued in series production from 1955 to 1974 undergoing, in typical VW fashion, many year by year improvements.

The early cars, 1955 – July 59, are now known as ‘Low Lights’ due to the headlights being 50mm lower and the wings more rounded, with different fresh air grills.

These were only ever produced from the factory as left hand drive although specialists converted some to RHD.

Many changes mirrored the Beetle upgrades, but mainly mechanical and not obvious to the casual observer.

The change easiest to see is how the rear lights grew in size (for safety) over the years. The engine, started out at 1192cc and 30bhp, and ended with the 1584cc, 50bhp model.

A semi automatic transmission was also offered as an option from 1968.

Although the suspension was virtually the same as the Beetle, the sleek, low body gave the car a good ride and slightly better performance, but it was never advertised as an all out sports car.

But above all it has Classic Style. 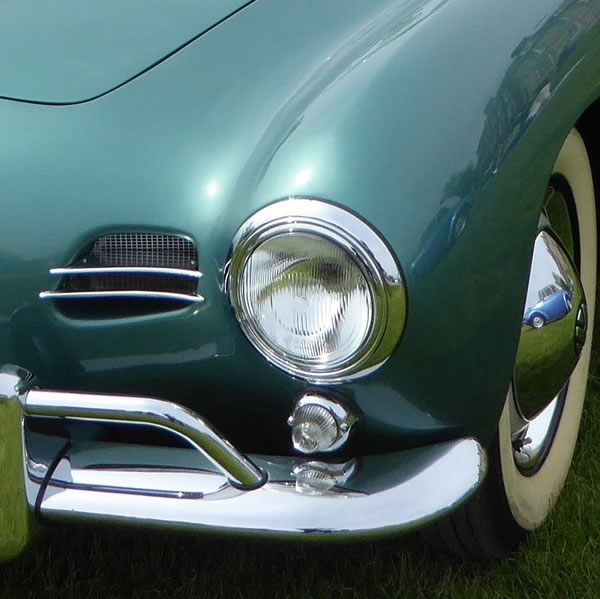 Thanks to ‘Essential Volkswagen Karmann Ghia’ by Laurence Meredith for the data for this summary.